A Mr. Met in Philly

On Saturday, April 14, I woke up with the sun shining into my window, extremely excited for our road trip to Philadelphia, PA. It had been a long week, and the trip, planned for a while, could not have come at a better time. It had been planned before knowledge of the Mets presence in Philly entered my cranium, and unfortunately we didn’t have the ability to visit Citizens Bank Park to take in a road game. That did not mean there would be no representing. Just as I had done the last time I was in Philly, I decked myself out in Mets paraphernalia, this time in my Blue RA Dickey Throwback and my blue Cooperstown Collection Mets cap (with a blue button top and no MLB logo in the back.) We hopped in the car, picked up the Baseball Voodoo Gypsy and his wife, and jetted to the Brooklyn Queens Expressway to get our journey underway. The Voodoo Gypsy made sure to point out (as he always does) that when I wear Mets gear, I never fail to wear at least two items (he keeps asking me when I’m going to throw on the baseball pants.)

We got to Philly around 2, dropped our stuff off at our friend Ted’s place, and headed out to brunch. I have walked a little bit through Center City, near Independence Hall and the Bell, I hadn’t felt like I truly explored the Iladelph town that much, and really not at all during the day. That afternoon, however, we all took a 15-minute walk to a place called Silk City, a solid spot at Spring Garden and N. 5th Street in Northern Liberties for good eats (Before I forget, Ted made sure to point out to me that the area I referred to in my Mitchell and Ness jacket post as North Philly is actually referred to as Northern Liberties. It is North of Center City, but what they refer to as North Philly is actually even northier than Northern Liberties.) 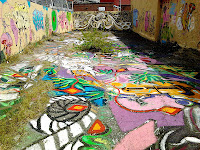 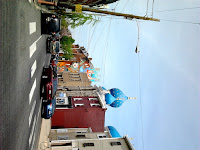 In the moment, I didn’t feel like bringing my bulky camera with us, but I was able to snap some shots of our walk with my phone, including that graffiti lot you see on the left, and the Greek Orthodox Church you see on the right (click on both to enlarge.) 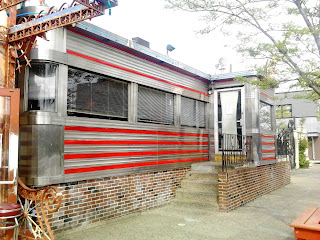 Silk City is a very sleekly-designed diner, bar and lounge with a very nice outside area. Luckily, there were some seats available. We walked out, some heads turning as they saw my Metsieness. I guess it’s in my nature as an actor to be loud and crave attention. Although not appreciating that stereotype I have tried to calm it down, and done so, I believe, with some success, as I have entered my late-20’s and adulthood. My love of the Mets, and being in a town where my Mets are taking on the city’s baseball team that day, truly brings the loudness to the foreground. 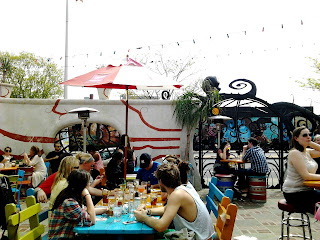 The outside, which has a very Tim Burton-esque design, was filled with sports paraphernalia, including a Yankees hat, a Victorino Phillie shirt and an Indians cap. Megan, the Voodoo Gypsy’s wife, is a great reporter for Our Town and West Side Spirit (her personal website is here, and you can follow her on twitter here) and felt inclined to report to people in the tweet world via Instagram that she was at lunch with Mr. Met (‘cause she thinks I and my Metsieness are absolutely ridiculous.)

Which brings me to this point: everyone reading this is either a Mr. Met or knows a Mr. Met. You might be a casual Mets fan, not inclined to constantly deck yourself out in the Orange and Blue, but you probably know someone like me who does constantly deck themselves out in the Orange and Blue. The world needs us Mr. Mets, an always-optimistic giant baseball head that won’t let the outside world bring us down, no matter how bleak things look.
Anyway, if you’re ever down in Philly, do yourself a favor and go to Silk City. I had the Creamed Chopped Beef with two eggs poured on top of white toast, and it was delicious. I took a picture of it, but that was after I had begun to devour it and thought to myself I should have taken a picture of it before I dove into it. So, I’ll spare all of you and not put the photo up of a half-eaten meal. 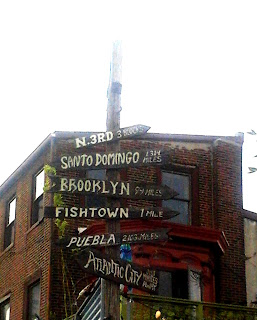 By the end, I was getting a little antsy ‘cause the game was gonna start soon, and I knew we still had the whole walk back to the apartment. “Whoa there, horsie!” Everybody collectively said to me, and they were absolutely right. It was a lovely day, we were outside and, of course, enjoying each other’s company. I didn’t need to see every pitch as it goes down. So, I took it easy and stopped being a neurotic baseball fan, if only for a moment.
While we were waiting outside the joint for one of us to finish up in the bathroom, a waiter leaned out of a side door and booed me, albeit a friendly boo, and immediately went back inside. That wasn’t the only boo I got that weekend, and I have to say, none of them were frowning while they did so. They all had smiles on their faces, and besides the waiter who was quick to lean out and go back in, they all were ready for a baseball conversation thereafter. Philly fans get a bad rap, or at least some of the classless ones bring the friendlier ones down. That really can be said about any sports fan-base (and the human race, for that matter.)
We began to walk back and I pulled my phone out to cue the gameday up. The first two batters went down quickly to Vance Worley, and up walked David Wright. Ted and I were extremely surprised to hear earlier that Wright was going to be in the line-up since we both had heard he was, in all likelihood, headed to the disabled list. As his name came up on the screen, I said to myself, “Watch him hit a home run on the first pitch he sees back from being injured.” And sure enough, the next update was “David Wright Homers to center field on a fastball.” I updated Ted, and couldn’t believe I “predicted” what was going to happen.
It was extremely enjoyable to watch the Mets play so well and take the series that Saturday while I myself was in Philadelphia. Ted was extremely pissed at the ineptness of the Phillie offense, as every Phillie fan is right now, but I had a huge smile on my face watching Jon Niese do his thing, sitting down batter after batter on his way to a solid W. Tim was ready to root against the Mets and put another hex on them, but discovered he wasn’t just rooting against the Orange and Blue but rooting as well for the Red and White (that day they were cream-colored, though. Great day-game throwbacks.) He kept reminiscing throughout of the players he remembers from his Philly years, and you could tell he still has a special place for the team in his heart.  I told him I endorse the Baseball Gypsy embracing the Phillies as his team, and of course Ted wholeheartedly agrees.
On Sunday morning, while everyone got a little extra sleep, my girlfriend and I decided to take a walk through the neighborhood again, maybe grab a brunch as well. This time, however, I didn’t want to be so loud and I took off the Blue jersey, the Mets hat the only Orange and Blue paraphernalia being worn. That didn’t stop the comments, which goes to show you how much of a conversation piece any type of Met paraphernalia can be. “The Mets! Nah!” “Yeah, man, you know it!” (Although my girlfriend was wearing my non-Mets sweatshirt with a Mets patch I put on the left sleeve, so that might have been what roused up everything.) We talked baseball for a couple blocks after that before realizing we had missed out turn. 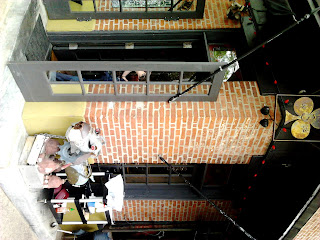 Later, after having brunch at this nice place called N. 3rd at (you guessed it) N. 3rd Street and Brown Street, a man passed us and in a very quiet tone said, “Let’s Go Mets.” We turned around, and not as quietly said, “Really?!” He opened up his button-down shirt Superman style to reveal a black shirt with “Mets” across his chest.
LET’S. GO. METS.
We began watching the Sunday game at Ted’s but had to leave in the middle of it. Unfortunately, the Mets bullpen couldn’t hold a surprising Mike Pelfrey 2-1 lead and I heard them implode in the car on the radio. Oh, well. You can’t win ‘em all.
That weekend reaffirmed what I said in the Beer Garden post: Met fans, don’t be afraid to go into another city showing off how much of a Mr. Met you are. I fully expected much more animosity than I have received in Philly so far this season, and I cannot fathom it being any worse in any other city, given New York and Philly’s general rivalry.

We’ll see what it’s like when I hit the streets of Denver decked out in my Mr. Met best. 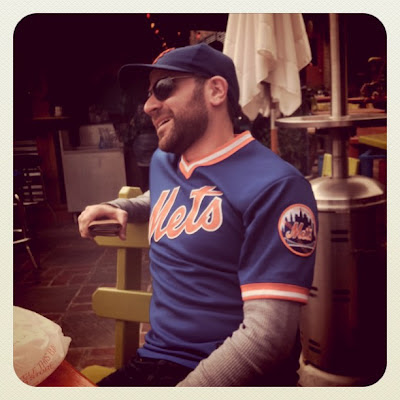