Jose Reyes will make his Marlins' Citi Field Debut tonight. I will be DVRing the game, going radio silent as I play softball with my Co-workers at 6:30.

With his appearance in mind, I revisit a post I made in the first weeks of this blog's existence.

On the second to last day of the season, I went to Citi Field for what I knew would be my last game of the 2011 campaign. I went by myself and bought a cheap upper decker. I made my way to right behind home plate, the fair-weather fans' avoidance of the Meadows of Flushing making the choice of seating possible. With the field sprawled out in front of me, for one last time before another October without Orange and Blue baseball, I reaffirmed my love for the game.

We were all there not only for baseball, but to see if our shortstop could continue to march towards the first ever batting title in the 50 seasons of the franchise. A three-hit night would be nice. Just dish out some singles, steal some bases, and send us into the winter on a high note. Jose Reyes, however, went above and beyond our expectations, knocking two home runs to right-center and the Pepsi Porch, respectively. After the second home run, we wouldn't let our shortstop sit down without a curtain call, showing him why there was no reason to ever consider leaving the New York Mets.

The fact Manny Acosta blew the save with two strikes on the Reds' batters only meant we'd get at least another inning of Jose Reyes, at least another inning of baseball for the year. As the game marched into the twelfth, with Jose Reyes having provided one more hit in the ninth, us fans who were still there did not want this night to end. With Mets baseball in 2011 hanging in the balance, the longer it went on, the better.

Fast forward to the night of December 5th. My girlfriend and I are leaving our bar spot in Brooklyn when Ted, the Philly fan, sent me a non-sarcastic text that read, "I'm sorry for your loss." (I swear, he wasn't being sarcastic.) I quickly looked up Metsblog on my phone, and there written across the page, like a dagger in the heart, read, "Jose Reyes signs six-year $106 million deal with the Marlins." An outlandish deal, but a dagger nonetheless.

The next morning at work, the resident Yankee fan of the office turned the corner with the largest, most annoying grin on his face, ready to rub the event of Sunday night in.

My initial reaction was anger. Not at the Mets for screwing their finances up, but at Jose Reyes (and, in a broad sense, the modern athletic landscape) for his disloyalty. Here we are at a crossroads of our franchise's history, and the man can't even help the family out. I'm gonna boo him so hard when he comes back, I thought to myself.

As I took a stroll around the internet, reading eulogy after Jose Reyes' Met career eulogy, I began to feel even more of a sense of pride in the team. I focused on the players we still have, and it made me extremely excited for the upcoming season. While everyone was either laughing at us or taking pity on us, I wanted to show New York how much I love this team, and how much I can't wait for Mets baseball to begin again.

At lunch, I took the 1 train to the Mets Clubhouse on 42nd Street. When I woke up that morning, I had this crazy idea I wanted to buy a Mets tie and wear it to work, much like Sandy Alderson did his first day on the job. If it were professional, I would have worn a Mets T-shirt and my Mets cap, but I needed something "executive." So I bought this: 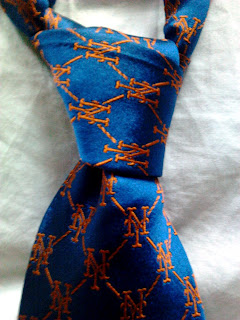 I got ready to pay when I looked down into the glass counter and saw something that my pocket had been waiting for: 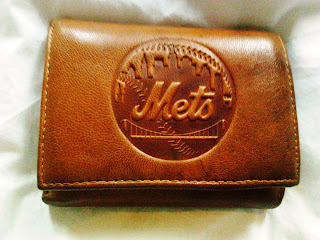 I had lost a wallet that belonged to my grandfather, and this Mets wallet looked exactly like my grandfather's wallet sans the Mets logo. Once I saw it, there was no way I could walk out of that store without it.

The rest of the day, I just Mets-ed out to the max. I bought a Mets thermal shirt online, and customized a Mets blue 80's jersey with my favorite player on it: 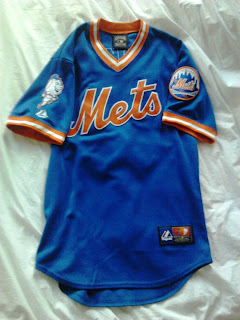 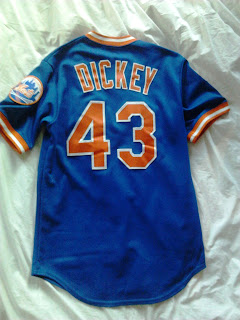 The patches were added by me, and I still have to add "43" to the front. My girlfriend doesn't really like me walking around with a "Dickey" on my back, but I don't care. Robert Alan Dickey is the man.

Any anger I had calmed down over the next few days (and I will probably give Reyes a sizable ovation before rooting hard against him on every pitch.) When I saw Jose interviewed by Kevin Burkhardt in that horrendous Marlins Jersey at the Winter Meetings, I realized how naive the kid still is. First off, he bought into the Marlins "love" and our lack thereof, and secondly, when Kevin said, "There are people crying back in New York," Jose frantically said, "It's not my fault! It's not my fault!" Come on! You signed the dotted line, you had your set price. It's the Metropolitans' fault they lost one of the greatest homegrown players they've ever had and it's Jose's fault he wanted to get paid for it. Don't sit there and say you have no responsibility for the reason you're wearing that ugly jersey.

Jose Reyes is a fantastic player, with a lot of natural baseball instinct. But a lot of his game is physical, and as he gets older, and has to make up for that physical loss, he most certainly will not be worth the back-ended deal he is getting. Ruben Tejada is not Jose Reyes, and that's a good thing. He is not the physical specimen Reyes is and because of it he has to compensate with a very high baseball IQ. I can't tell you how many times Ruben Tejada kept working the count and fouling off pitches in 2011, when he would have struck out or gotten jammed in 2010. He impressed me at the plate, and he was only 21! I am very excited to see this kid grow right before our eyes, and I know he will not let the pressure of replacing Jose Reyes get in the way of performing.

Too many times over the last few years I have heard, "Where Reyes goes, so do the Mets." When he was injured the team would use him as an excuse for why they weren't performing at a high level. This is an exciting time in the history of this team, and the potential for a complete effort by every member of this ball club is something every Mets fan should look forward to. RA Dickey put it best on the day Jose Reyes grew fins:

“The weight left by Jose’s leaving is far lighter when distributed on the backs of the collective body.”

I cannot wait for Jose Reyes to swing through an RA Dickey knuckleball.