Yesterday morning, I woke up with the largest smile on my face. The event I had been waiting for since the 3-0 win over Cincinnati had finally arrived. None of the negativity that has surrounded this team through the offseason mattered anymore. On April 5, the only thing that mattered was that a baseball game that actually counts would be played. And my girlfriend and I would be there thanks to a birthday gift from my aunt, uncle and cousin.

Decked out in my Mets jacket, and with my camera in hand, we hopped on the N train in Astoria to Queensboro Plaza and caught the 7. The local appeared to be the only thing that was running at the time, which ended up being a pleasant surprise, for I was able to get some nice shots of Queens along the way. 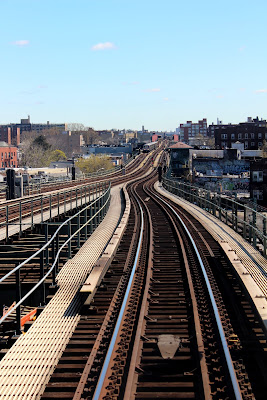 Now that I live in the borough, I have noticed that Queens is a hot bed for graffiti. Besides the 5 Pointz Aerosol Art Center, there is plenty of graffiti lining the buildings along the 7 line route. I had seen it before, but recently I bought a massive coffee table book called Subway Art, and have since taken a fascination in the ways of the aerosol. Some of it is vandalism, some of it is art, and which is which and what is what is completely up to the interpretation of the viewer. 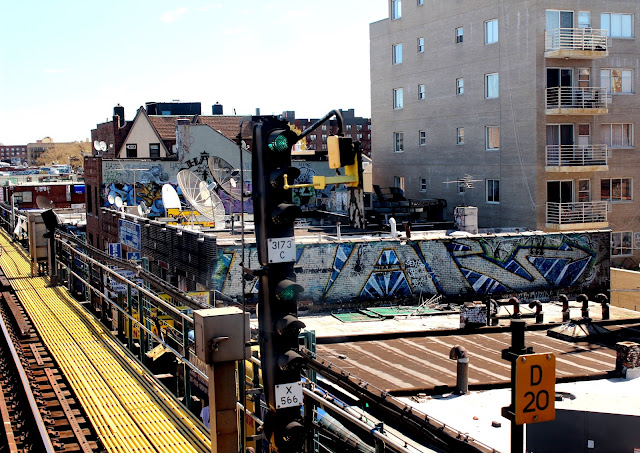 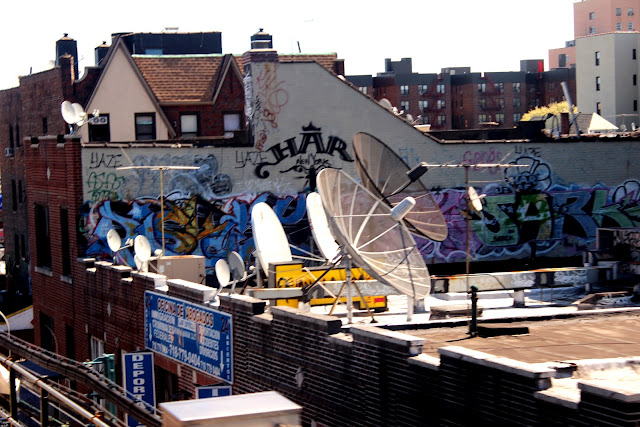 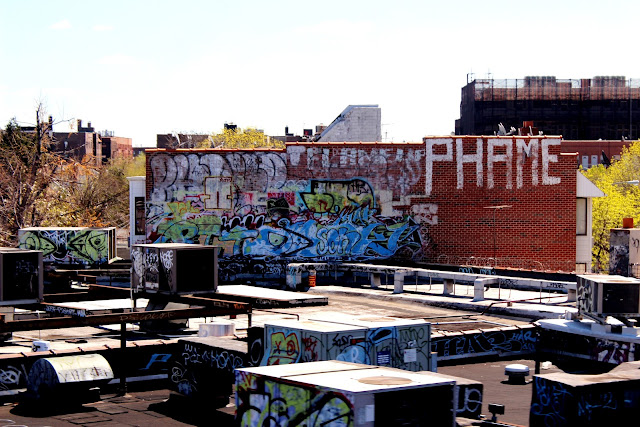 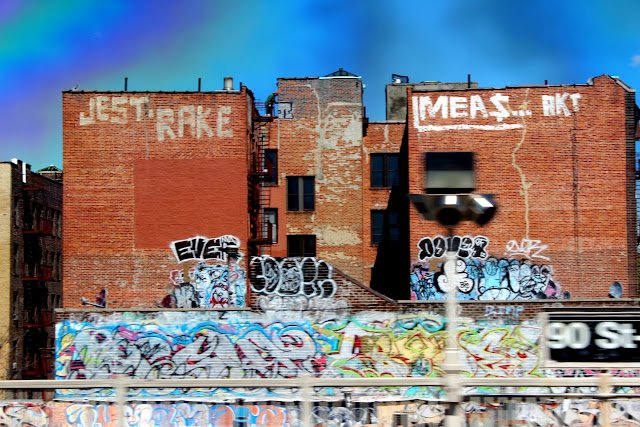 As these buildings passed us, I glanced in front of me and saw, peering over the many Queens apartments, the Citi we've been waiting for. 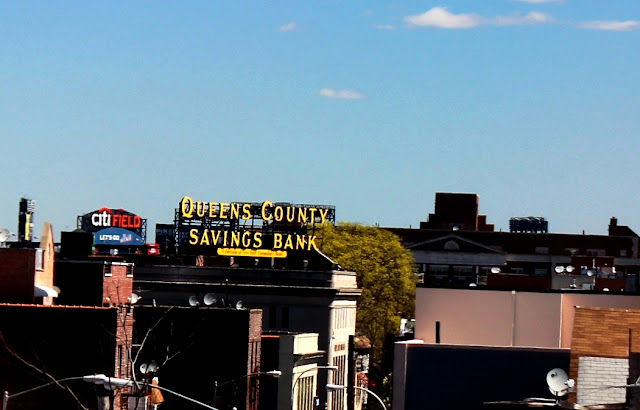 When we finally arrived, what a sight for sore eyes the packed, sun-drenched Citi Field Plaza was. It might have been a little chillier near the water, but no worries. There would soon be baseball to warm us up. 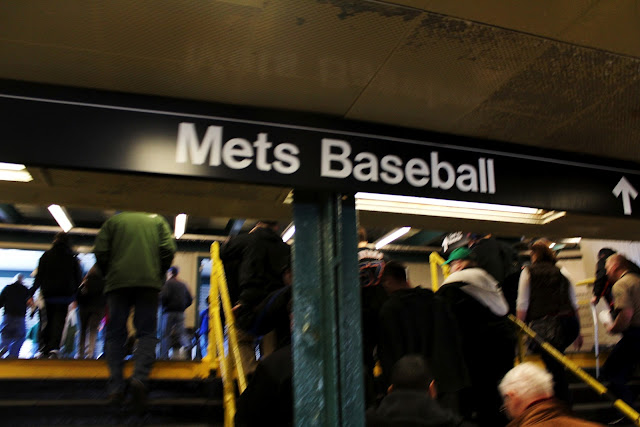 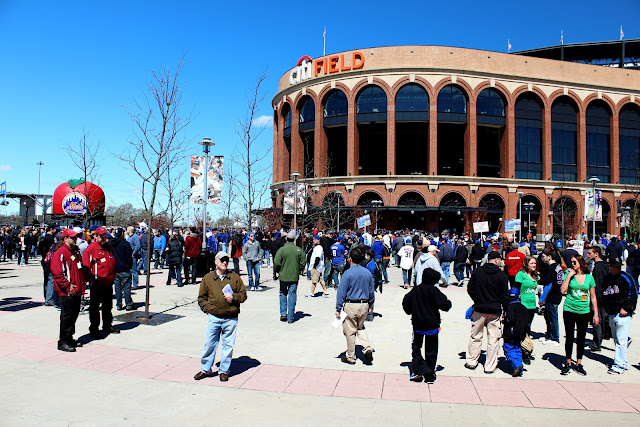 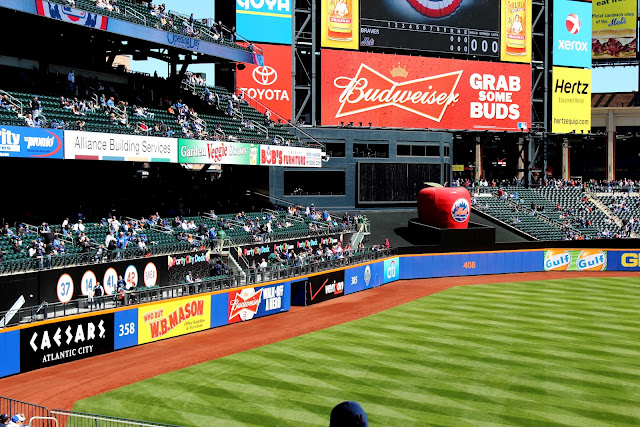 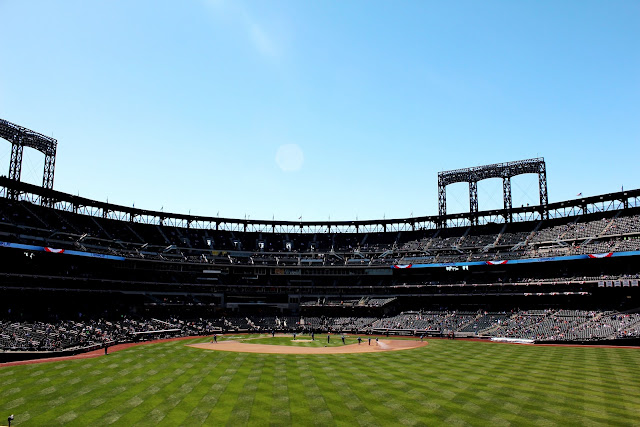 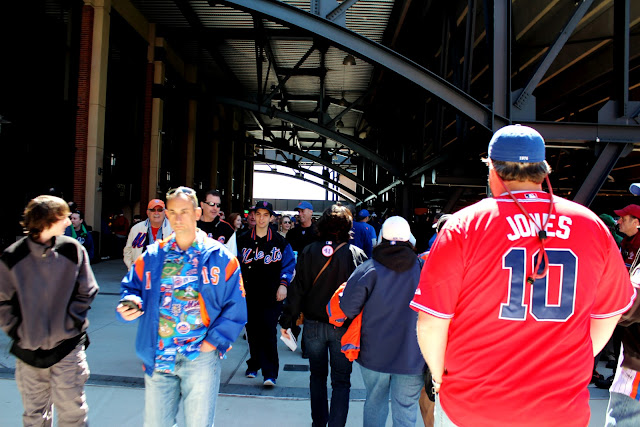 When we found our seats right behind home plate in the upper deck, we saw an even awesomer sight for sore eyes: Mr. Johan Santana, warming up in right field. 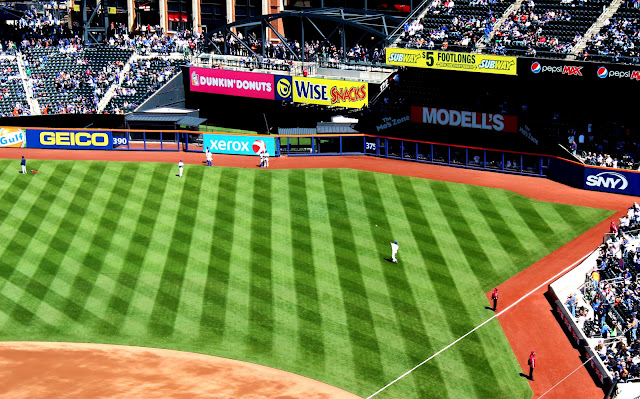 The usual opening day ceremonies I had seen on TV in years past were fantastic. Our Pelfing Bag Mike and the training staff got the loudest boos in the introductions (other than the Atlanta Braves) and Ike Davis, David Wright, RA Dickey and the Mets massage therapist got the loudest ovations. After that, it was the late Number 8's turn to shine. (He was before my time, but couple days after his death, I wrote about what Gary Carter means to me.) Howie Rose serenaded us with the memory of our Kid, and after a moment of silence, the Carter Family unveiled a memorial for Gary on the newly blue, left-center field wall in the image of the patch the Mets will wear throughout the season. After the National Anthem (a song I cannot hear without thinking of baseball) the Carter Family threw out the ceremonial first pitches to Ron Darling, Keith Hernandez, Daryl Strawberry and Mookie Wilson. After that, it was time to play ball.

As Johan Santana took the mound in the crisp new/old jersey, the ballpark was filled with anticipation and anxiety. He had not taken a major league mound in a year and a half, and everyone was pumped to see how he would perform, none more than Johan himself. He is a very smart and professional pitcher, and he didn't let his nerves destroy his levelheadedness. 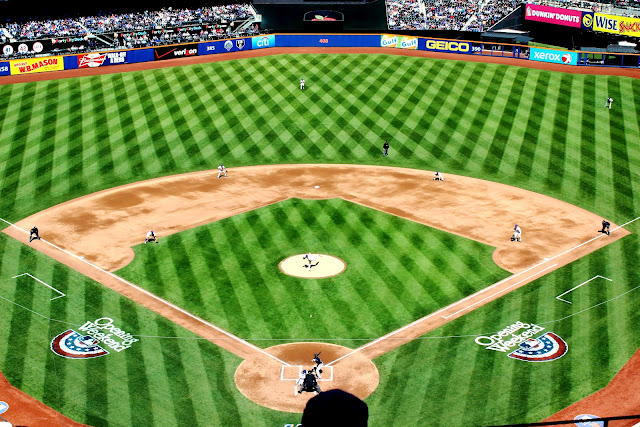 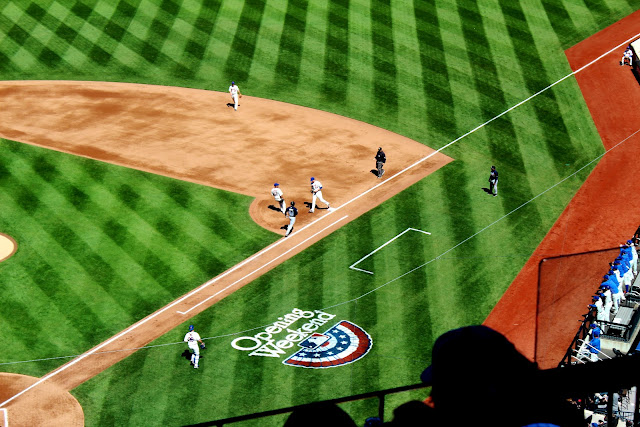 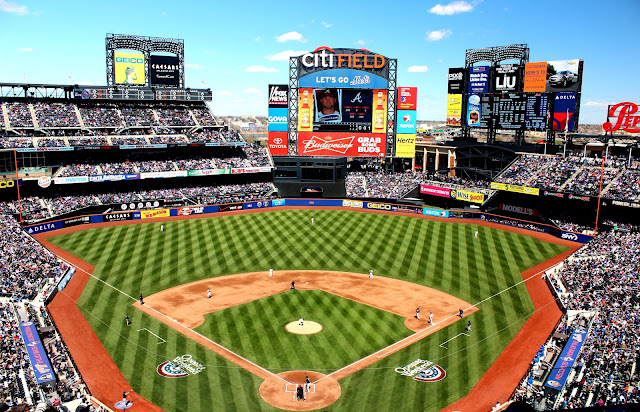 Except for a hiccup of a single (there goes the no-hitter in Mets game #7,969) Johan breezed through the first inning, inducing a ground out, a fly ball to right field and strike out of Dan Uggla. Overall, Johan pitched an excellent 5 innings, giving up only two hits and 2 walks. Those two walks came in the 5th inning, when looking up at his pitch count (he was on a strict 80-90 pitch limit) we could see he was running out of a little steam at around 75 pitches, which was understandable given his situation. After a double and the 2 walks to load the bases, Michael Bourn took the count to 3-1. We were nervous, but got behind Santana more than at any point throughout the day, with a "Let's Go Mets" chant reverberating around the ballpark. He got a strike on a fastball at Bourn's knees, and then, to the extreme delight of the everyone in the building, got him to chop the ball directly back to the mound. With everybody elated, Santana tossed a high throw over to Ike, who leaped ever so slightly before coming down on the base for the out.

It was a good ol' fashion pitcher's duel, as the Mets offense couldn't get a lick off the Braves starter Tommy Hanson. They only had 2 hits through the 6th inning, and around that time, I looked up at the scoreboard and saw that the 4 other games being played around that time were all scoreless as well. Who would be the first team to score?

Andres Torres started the 6th off with a walk. Daniel Murphy then singled and Andres Torres showed off the speed and energy we brought him here for by racing from 1st to 3rd (more on that energy soon.) David Wright then stepped in and, much to the delight of all of us, swung at Tommy's first helping, singling to left field for the first major league run of the day. 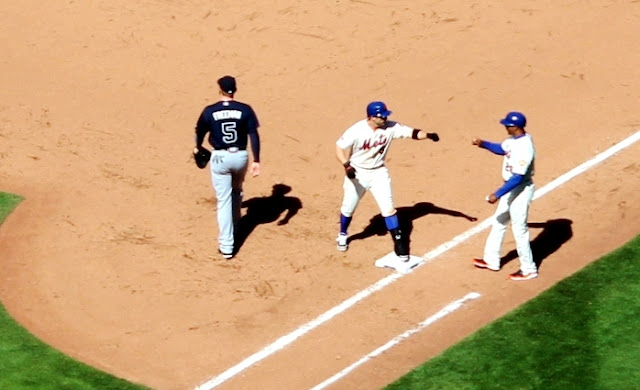 Tommy Hanson, coming back from surgery as well, was done after that. Unfortunately, the Mets couldn't plate any more runs in the inning (with runners on, Jason Bay ironically got under a ball and hit it right in front of the new wall in left-center) and we carried a 1-0 lead into the 7th.

In that inning, with Ramon Ramirez on the mound (brought over in the Angel Pagan trade along with Andres Torres), a Brave hit a ball to right-center field that looked catchable if Torres were to extend and dive for it. He did extend, but it went over his glove and to the wall for a double. He came up awkward and started walking towards the dugout as Ray Ramirez, the head trainer, started jogging towards him. Turned out Torres strained his left calf, the same muscle he strained just two weeks ago. Andres Torres takes medication for ADHD, and going off of my own personal experience with ADHD pills, I wondered in this Rising Apple post whether his ADHD medicine might be a reason he keeps having these strains. Clearly, there is not one definitive reason why an athlete would keep having these types of injuries, but having experienced what it feels like to be treated for the diagnosis for 20 years of my life, I think the medicine could be one of the things that aids the strains.

With the Braves bats quiet but the Mets bats less so, we were treated to a first look of the revamped bullpen. After Ramon Ramirez, Tim Byrdak made his debut less than 4 weeks after knee surgery and looked real sharp. That man is a freak of nature, and he needs to grow his horseshoe back. Byrdak gave way to Jon Rauch, who struggled during the spring but progressed as March gave way to April. He pitched a solid 8th inning, setting the save up for our brand-spanking new closer, Frank Francisco.

The Mets got some runners on in the 8th inning, and we so desperately wanted them to get a little insurance for our 9th inning man. But alas, they left the bases loaded against Johnny Venters, and Frankie came out of the bullpen needing to hold a 1-0 lead.

Francisco struggled during the spring as well, and had a knee scare the last couple of days. An MRI turned out negative, and here he was trying to prove to the Citi Faithful he was the right man for the job. 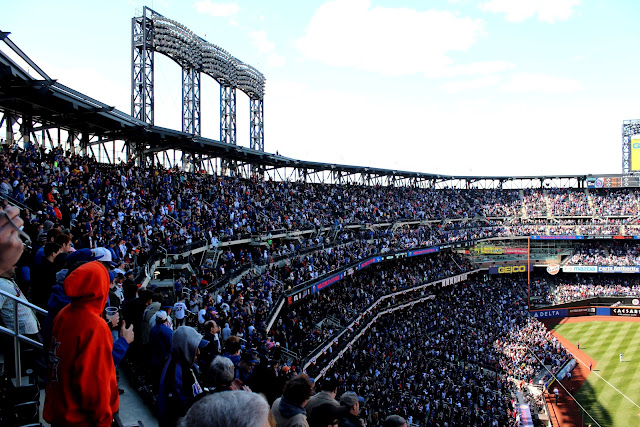 The new Frankie quickly got 2 strikes on the batter, and, as loud as ever, we willed him to tomahawk the Brave. 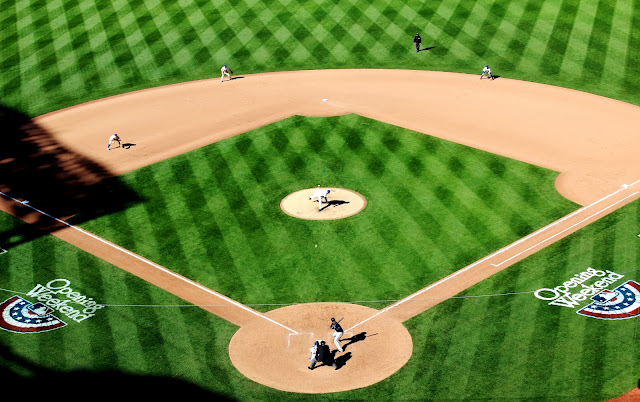 With that, he swung on and missed, and all of us went crazy in the elation of the 1-0 Mets win. 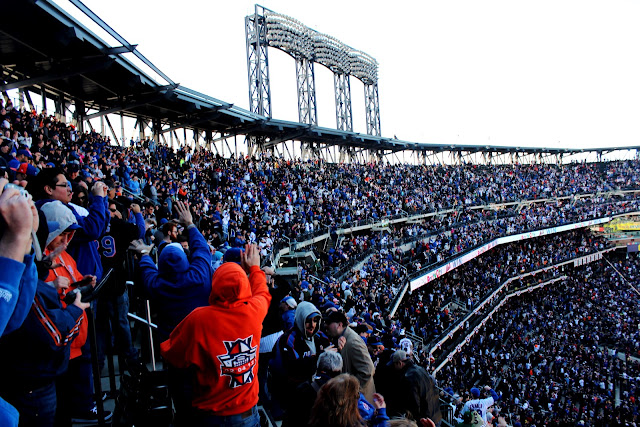 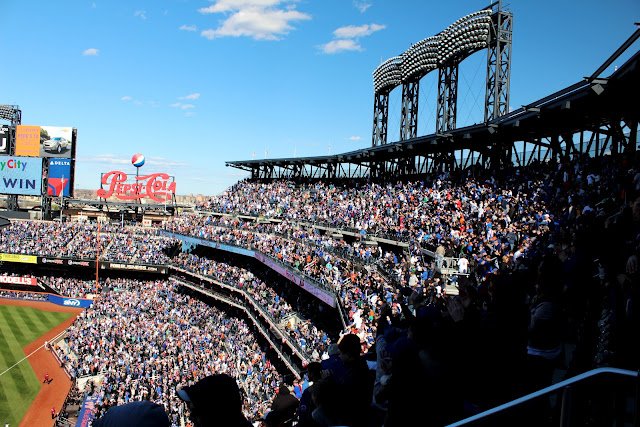 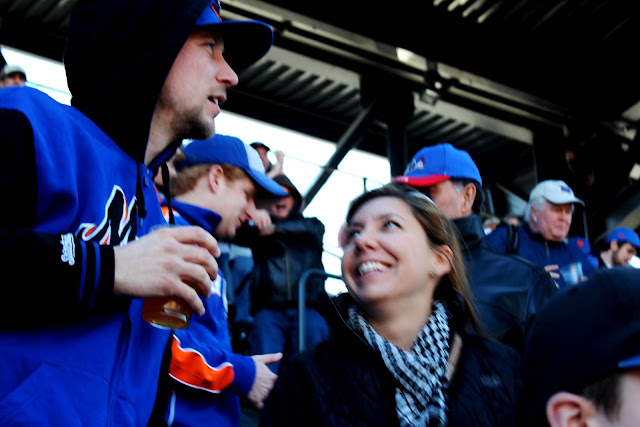 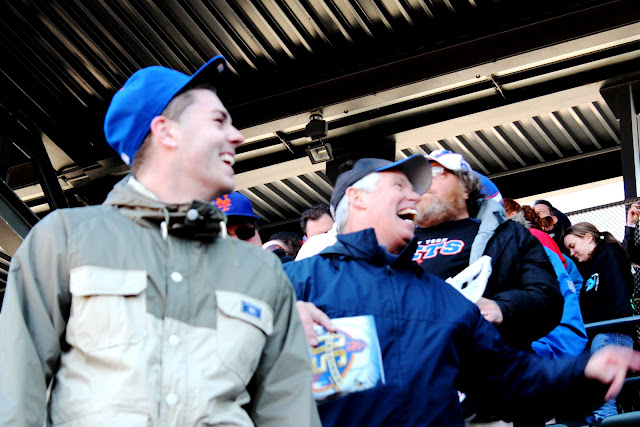 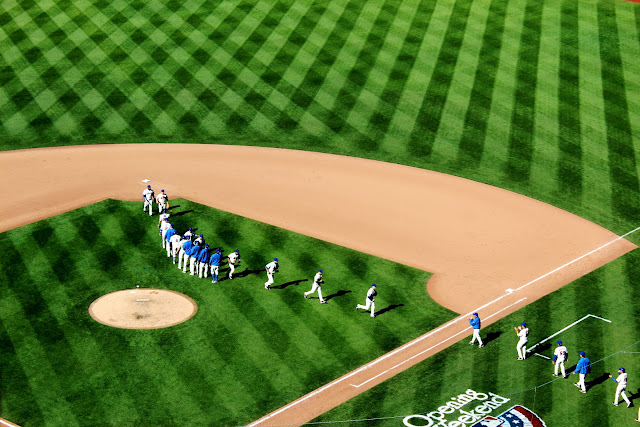 All in all, what an awesome experience this first game was. Every year, baseball finds a way to feel fresher than ever to me, and this opening day was nothing short of that. We will be traveling back out to Citi Field to see RA Dickey make his 2012 debut on Saturday at 1:10 PM. My RA Dickey Blue throwback jersey will be making it's 2012 Citi Field debut as well. 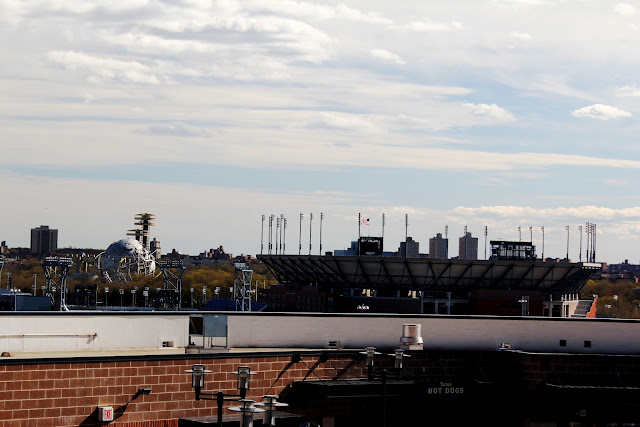 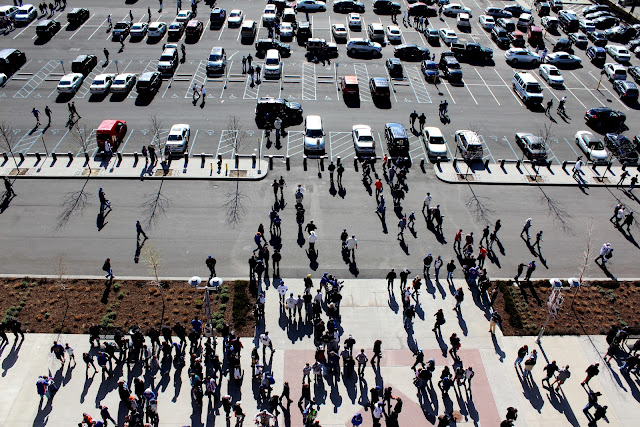 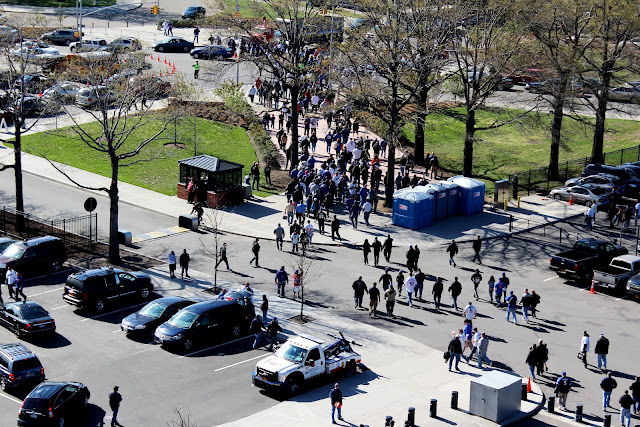 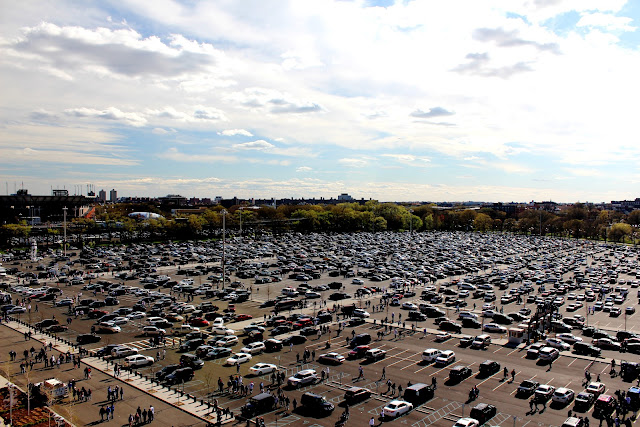 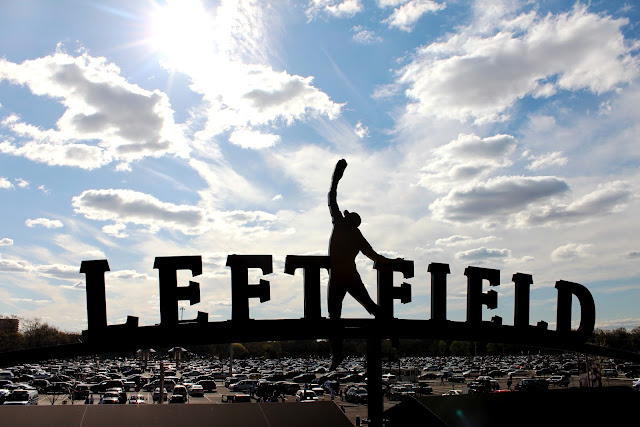