Life's Too Short and We're All Gonna Die, But For Now, We Have the Mets

It's easy to poke fun at a sentence like that, and many people have poked fun at that type of sentimentality. "If I'm going to die one day, why waste my time on the Mets? And why waste my time on something like baseball? Why bother with sports in general? Doesn't it just add unnecessary stress?" The last one I have thought about, especially standing in the upper deck while the Mets have loaded the bases, still an out away from having the rally be for naught. Had Daniel Murphy not gotten the tying hit, had David Wright not gotten the winning one, had the entire thing been for naught the way it was a night later against the Cubs, I still would have sat there, looking out at the baseball diamond thinking it's the most beautiful image in the world, knowing that win or lose, I had fun. 'Cause this is what we signed up for. This is why we love this team, and this is why we love this game. How much sweeter is 2012 after having gone through 2006 to 2010? (How much sweeter was the no-hitter having gone through 50 years of 1-hitters?) Every time the Mets have won a ring, they came from outta nowhere. From 2006-2009, they were the "team to beat"... and people beat them. "You Gotta Believe" is the identity of this franchise. We want them to be consistent and they appear to be on their way, from changing "You Gotta Believe" into "Believe it," but nobody ever picked the Mets to win the World Series, or even go to one, at the beginning of the seasons they have won it or have gone there. And the year people probably did pick them to at least make it to the World Series, they had to pull off one of the greatest comebacks in the history of sports to win the trophy. That appears to be the narrative of this franchise. And I love watching it day in and day out.

I believe in the spirituality of baseball. I do not follow a religion (I identify myself culturally as Jewish), though I find God in my own particular ways, one being through the sanctuaries that house the diamonds. Baseball unfolds as life does in front of us, and we bend the happenings to fit into a particular narrative we believe we see unfolding, or we want to see unfolding. That is how the Curse of the Bambino was written. And while we have our role in the scripture, other outside forces, whether just luck or happenstance, add to the mystic nature of the game: Babe Ruth gets traded, Bucky Dent cracks a homer, Bill Buckner let's it get away, Bernie Williams walks off in game 1, and Aaron Boone wins it off the Knuckler. After A-Rod gets traded to the Yankees (changing his number from 3 to 13 because a certain Yankees' retired digits), the Letter B starts coming through for the Red Sox instead of against them mid-series. All of a sudden, Mark Bellhorn starts getting big hits for the Sox, and 86 years of momentum shifts, leading the Red Sox to beat the Yankees in game 7 at the stroke of midnight (clearly Bellhorn was not the only player factor...I'm just sayin'...The B's!) They have to take on a franchise in the Cardinals who beat them in 7 games TWICE. This time, however, the Red Sox sweep them in 4 games. The last out they need is in the form of Number 3 Edgar Rentaria, and once they get Number 3 out, the Curse of Number 3 will be lifted underneath a full, red harvest moon in St. Louis. This is the type of stuff we writers are supposed to come up with. But there is no way to fix THAT type of narrative. 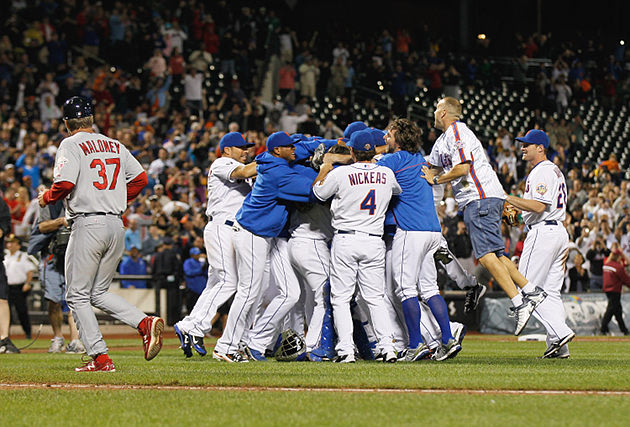 A spiritual interpretation can be found through a happening in this current Mets season as well. At the beginning of the year, the catcher of the last Mets World Championship passed what felt like much too soon. At the end of Johan's no-hitter, the Mets had 8 hits and 8 runs, and some guy in a Number 8 Carter jersey felt inclined to run out onto the field to join in the celebration. Call it a coincidence, call it whatever you want, but the idea there is something else to it just makes me smile. It adds to the intrigue. It makes me smile that for as long as humans exist and, in turn, as long as humans follow the game and the New York National League Baseball Fans follow the Mets, a Gary Carter Number 8 Jersey will be in the celebration images of a game that lifted a huge burden off every individual attached to this team. What's wrong with thinking Gary Carter's spirit helped them along like Angels in the Outfield? It adds to the smile (and the hope of something else after this world.) 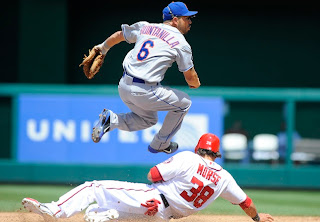 I love baseball. I love the way the field sprawls out in front of me when I'm right behind home plate. I love the layout of the players on the field. I love the smoothness of the game. The way the ground ball goes into the shortstop's glove and the rhythm in which he gathers it and throws to get the runner by a millisecond. I love how majestic the game looks, whether it be the turning of a double play or the simple swing of a bat. The way an outfielder times his jump perfectly to come together with the ball just when the ball was going to come together with the other side of the wall. I love every aspect of this game, and I love that I was destined to root for the Metsies. If they don't win, it's a low-down shame.

This squad has taken us on a classic amazin' ride so far. And even in all of that, we know they could have done better. But that's life, and that's baseball (couldn't help the metaphor and cliché). Sometimes you get the game-winning hit, sometimes you line up the middle into a game-ending double play. The patterns of the Mets' history show that it makes perfect sense for them to be just on the cusp instead of alone in 1st at the break. Even when the Mets were the dominators of baseballs, they had to chip away to win the championship. That what this team does. They chip away.

The Mets could win it all this year. They could win it all next year, they might never win it all again (with the definition of "never" varying depending on the life-span of each individual.) Regardless, the Mets and players such as RA Dickey have taught me to take everything in stride. To learn from your mistakes. Grow from the moments perceived as failures. If you have patience, hard work and dedication, good things will happen. Be humble. Don't celebrate before it's over (like the Red Sox of '86 were doing in the visiting dugout of Shea.)

I'm not sure how my story, your story, the human story or the Orange and Blue story will end. And uncertainty brews fear. But however it goes, I know I'm going to have a whole lotta fun watching baseball and the Mets from now until then.

And hopefully, more often than not, the images we see resemble the image below.