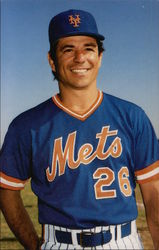 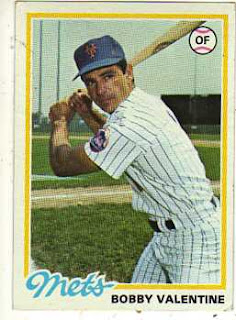 I was sick on Tuesday and decided to watch a certain something I had recorded; Mets Yearbook 1978 to be precise. I had seen a good amount of them and had been recording a good amount more on the DVR. They have all been fantastic, and wrap up, in essence, the awesome time had of any baseball season, win or lose. None more evident than Mets Yearbook 1978, the 17th Season of our New York Mets.

If some of you have not seen the Mets Yearbook series, please get on it. For me, somebody who did not live through the Life and Times of Flushing in 1978, the yearbook does a great job of endearing these characters they call the 1978 New York Mets to us. None more endearing than a character we have since known in another Mets era. That character is Bobby Valentine.

Now, this was Bobby's playing era. This is when Bobby grinned his teeth towards the Lady-Bubble-Gum-Blowing-Contest Judges to get extra credit for blowing the biggest bubble. Decked out in the Snow White-pinstriped pullovers, Bobby readies with such concentration, entrancing the crowd to see how far that bubble can blow. He has been assured his "bubble gum was not going to be tampered with by the measuring stick." Ed Kranepool can't keep up.

“I think I’m looking forward to next year’s contest. I’m gonna practice all winter, if my teeth can hold out, I’ll be there,' Kranepool says.

"It never occurred to Eddie to work the lady judges the way Bobby did." As Greg Prince of Faith and Fear in Flushing put it.

(But that's the thing, it still looked like so much fun. Much more fun than that horrendous 2009 season. I can't think of anything endearing about that one, outside of Omiracle and...nah, nothing else. Losing seasons can be endearing, and yes, we clearly want less of them. But don't be miserable folks. Have fun. It's baseball.)

Outside of the Bubble Gum eating contests, you have many things to look forward to. Don't want to spoil too much, but you got Banner NIGHT, Happy Days Vs Wives Softball game, Pete Rose breaking a National League Consecutive Hits Record, and Old Timers Day, with Ralph Kiner arriving in his Pirates Uniform via Hot Air Balloon (The way the Mets did Old Timers Day looks awesome and they should bring that back, let this generation get Kiner in a Hot Air Balloon!!) Oh, yeah, and Joe Torre manages and he's miked up. And the second best infield in the league. And John Stearns, speed demon. And the San Diego Chicken!!! And Willie Montanez's Home Run Trot! Guys, come on!! Go DVR it!!!! Go!!! Cause then after that you're gonna have to watch Mets Yearbook 1979:


“We're very Optimistic, B-bob. I hope that everyone who is seeing this movie will come out to Shea Stadium in 1979. I just know it’s going to be a great year, and we’re gonna win a lot of games, and you’re going to have a lot of fun.” --Lorinda de Roulet, COO of the 1979 New York Mets